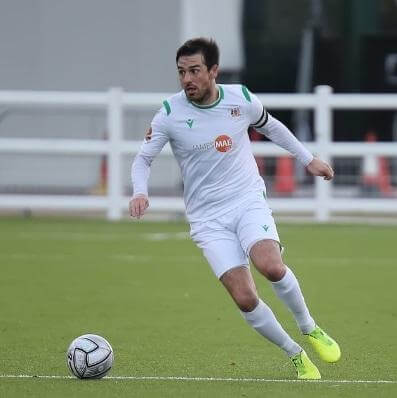 Today our captain Luca Havern has put pen to paper on a new one year contract at the Horsfall. After re-joining Mark’s squad for the unusual 20/21 season, Luca was named as club captain to help lead our exciting squad of youth and experience. This experience and know how is vital part of the clubs strategy of remaining competitive and allowing young players to develop, improve and get into full time football. The evidence of this being seen this year as Lewis Knight secured a permanent move to Notts County.

‘I’m really happy to commit to BPA for another season. Before this season was null and voided we were improving each week and our young players were growing in confidence so I hope we can build on that momentum come August. On a personal note I’d like to thank the management team and the club for their continued support and I am looking forward to hopefully welcoming some fans back to the Horsfall this summer.’

‘We are really pleased that Luca has committed himself to us for another season. He forms part of our core of experienced players who play a vital role in strong performances on the pitch whilst helping our younger players with their progression. Luca will continue to captain the team and we look forward to welcoming him back for pre-season in a few months time.’

With pre-season scheduled to start on the 26th of June keep your eyes peeled for more green and white army signings.