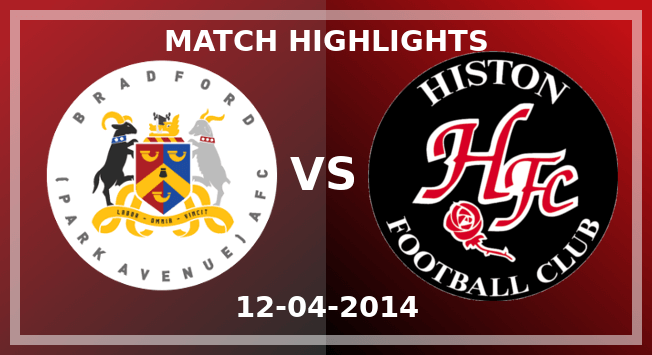 Towards the end of the 2013-14 campaign Bradford (Park Avenue) recorded a comfortable victory against Histon FC at the Horsfall Stadium.

Today we take a look back at that game that saw a brace and a goal for fan favourites, Chib Chilaka and Paul Walker.

Bradford (Park Avenue) recorded a comfortable victory against Histon FC at the Horsfall Stadium in The Skrill North.

To mark the 25th anniversary of the Hillsborough disaster, a well-respected minute’s silence took place before the match kicked off at 3.07pm.

Chib Chilaka scored two first-half goals to give the Avenue the lead at the break. The striker slotted home after James Knowles’ superb free-kick found Paul Walker, who spotted the run of Chilaka. Then, a minute before half-time, a brilliant run from Walker down the left flank allowed the winger to pass to Richard Marshall, but his strike hit the post, only for Chilaka to tap-in the rebound. The hosts sealed the win as Grant Black’s deep cross was brought down by Walker, and he curled a right-footed effort past the Stutes goalkeeper Charlie Grainger from 12 yards with the help of the post.

In a quiet opening spell of the first half, it was the visitors that created the better of the early chances. Matty Waters went close to giving his side the lead, as he fired a first time effort wide from six yards after receiving a cross from Michael Built.

Minutes later, the Stutes captain Charlie Day dispossessed Black in the middle of the park, and slipped a neat pass through to Waters, but the striker failed to trouble John Lamb in the Avenue goal from 16 yards.

Brian Page’s men were then punished as Chilaka’s strike gave the Avenue the lead. Knowles started the move with an exquisite 60 yard pass that landed at the feet of Walker on the touchline, the winger cut inside and played in Chilaka, who beat his man on the edge of the box, before side-footing into the bottom corner.

Following the goal, John Deacey’s men continued to press and were rewarded with their second goal, as Chilaka struck again to double their advantage. Walker burst down the left flank, crashing through two challenges before offloading inside to Marshall. The midfielder immediately charged into the box and opened up his body to curl an effort that beat Charlie Grainger, but hit the post, before falling to Chilaka who tapped in for his second.

The home side continued to attack in the second half and it wasn’t long before they scored again as Walker’s fine strike secured the win for the Avenue. Black received possession on the wide right from Chilaka and swung a deep cross that evaded everyone in the box, before falling to Walker at the far post. The impressive winger brought the ball down with his first touch and unleashed a curling strike with his right-foot that deflected in off the far post.

With ten minutes remaining, the home side nearly added a fourth from an unlikely goalscorer. The Avenue’s holding midfielder Jamie Price exchanged a delicate one two with Paul Beesley on the edge of the box, but his left-footed shot curled just wide from 20 yards.