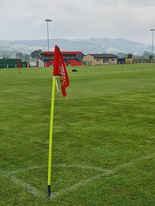 Silsden AFC and Bradford (Park Avenue) played out an entertaining stalemate at the Cobbydale Stadium. The away side showed plenty of promise in the opening ten minutes. Issac Marriott looked lively, forcing Sammy Lee into a save from 16 yards. Bradford continued to put pressure on their opponents with a quick corner allowing Nicky Clee to cross the ball to Trialist C on the edge of the box. But, the winger was unable to keep his effort down and the ball flew over the bar. The Cobbydalers nearly made the most of a poor corner by the Avenue as Jack Normanton picked up a loose ball and sprinted 80 yards.

The striker had support and pulled the ball back to Joe Mitchell, only for the midfielder to drag his shot wide from 14 yards. After watching Clee leave the pitch with a leg injury, replaced by young debutant Seb Bolton, Bradford had a couple of opportunities to take the lead. Trialist F, who impressed again in the middle of the field, threaded a through-ball to Trialist C, but his first touch was heavy and Lee was alert to dive at his feet and denied the winger. Again, Trialist C had another chance, following great work by Brad Dockerty who crossed the ball into the box, but Trialist C fired over from ten yards. Mark Bower, like he did against Campion AFC, named a different side for the second half. The hosts nearly broke the deadlock after the break. Mo Qasim beat Matty Downing down the right wing and curled an effort past the Trialist goalkeeper, but his strike brushed past the far post from 14 yards.

Some sloppy passing from Avenue allowed Silsden AFC another opportunity as Lewis Gardner went through on goal. The winger struck a powerful left-footed strike past the Avenue number one, but against the post. In the final 15 minutes, there was good link-up play between Rob Guilfoyle and Trialist H and it was the young striker that was denied his first goal in Avenue colours. The 18 year old, playing on the left of a front three, was causing problems and saw two efforts from 20 yards pushed away by the goalkeeper. Both teams continued to attack, looking for a winner and the Avenue Trialist goalkeeper was called into action again.

After making some good saves during the game, in the final few minutes, he used all of his height to tip over an effort over from 18 yards. Then, the Avenue defence were brave, throwing their bodies in front of a Normanton strike from close range to deny the hosts victory.