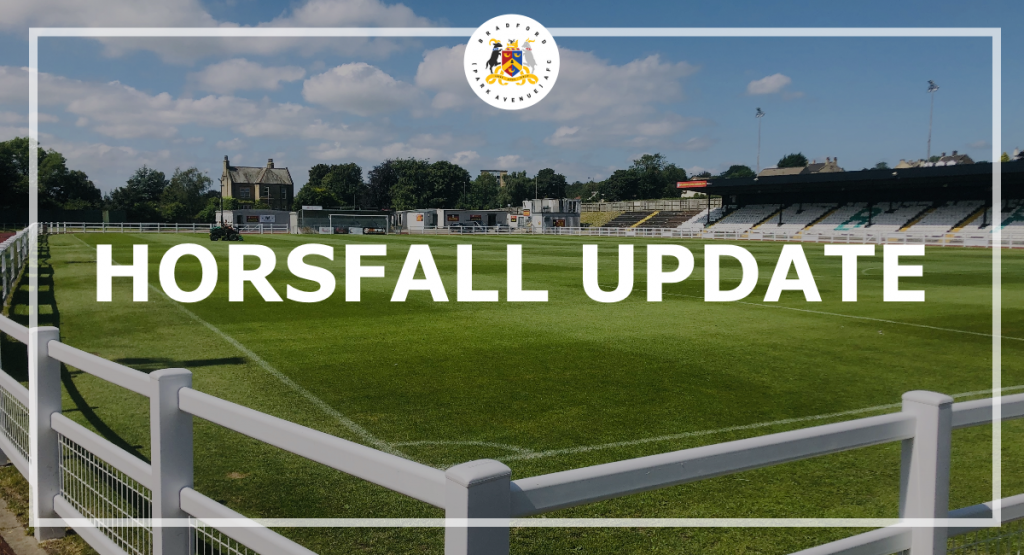 BRADFORD (Park Avenue) owner Gareth Roberts has today confirmed that the club have agreed terms on a 30-year lease to take control of Horsfall Stadium from the  City of Bradford  Metropolitan District Council.

The proposals have been in the pipeline for months, but now the paperwork has finally been completed and the lease will be effective once it is approved by Fields in Trust which has already indicated that it should be a formality.  Roberts and The Horsfall Community Trust, which he helped found two years ago, have ambitious plans and are looking to install a 3G pitch, improve lighting, fencing, roadways and parking, and some building work – with help from funding partners.

The improvements would provide a space to extend and improve existing uses, provide a better experience, and allow more opportunity for the public, especially children, to play a range of sporting activities at the ground every day, something the owner feels is vital for the Bradford community.

Roberts, who is from Bradford but now lives in Texas, flew over from America at the end of last week to help finalise the deal.

“We’ve been working hard on the lease for a long time, and we are grateful to the Bradford Council and to Fields In Trust for showing this level of confidence in us to take the site forwards at last. Together with the Horsfall Trust we have created the conditions for the community to come together and invest in what I believe can be a fantastic sports hub and a whole set of varied facilities for decades to come. In anticipation of the signing of the lease, we have appointed Colin Wilson as our Consultant Director of Development to add to our existing team and help pull everything together. He’ll be around quite a lot. We now invite potential partners and users of The Horsfall Community Sports Hub Project to come forwards with their ideas and discuss possibilities with us. We are very excited to hear from you”.

“We’ve got plenty of pictures of what the ground should look like in future. Many people have already put in a lot of work planning this development. In the works are security fencing around the site,  a 3G pitch and get some proper lights fitted around the ground, as the current lights are pointing all over the place! We couldn’t apply for financial help from the FA Stadium Improvement Fund until the lease was signed.

The project is close to Gareth Roberts’ heart. His family is originally from Wibsey and feels that there is not enough on offer for youngsters in the city, despite the best efforts of the council, and he wants to go some way towards changing that. He said:

“My goal is to help kids in Bradford. So many of the local grass pitches are in poor shape. Our proposed 3G pitch could be used every day and the new, modern lights cost less to run too. You can dim them, put them on and off whenever you want – they are very flexible these days.”

Gareth has also refused to completely rule out the idea of creating a new professional rugby team to play there either.

“We need to get the 3G pitch laid, with a crash pad underneath, so it suits both rugby and football, before we can have rugby played there. The project is primarily for the benefit of the community and there will be play on the 3G pitch during the week and on weekends. We could stage amateur rugby league games if teams want to use it, and we could potentially look at enabling or creating another rugby league team to play there, up to Rugby League Championship standard. To come up to those standards we would need a few things doing, but not too much. And our official capacity is about 3,500 but with a few changes, we could quickly expand that to 5,000.”

“These  improvements will not come cheap and unfortunately the 3G pitch is not eligible to get any funding from the football powers that be. That means that we will need to find partners to help with its funding.”

“This project will deliver much needed facilities for sport in Bradford . Please contact Colin on 03335660031 and discuss ideas and possibilities with us. These things need to be financially viable, but there are many ways to partner up together. We are excited to hear from you in the next few weeks.