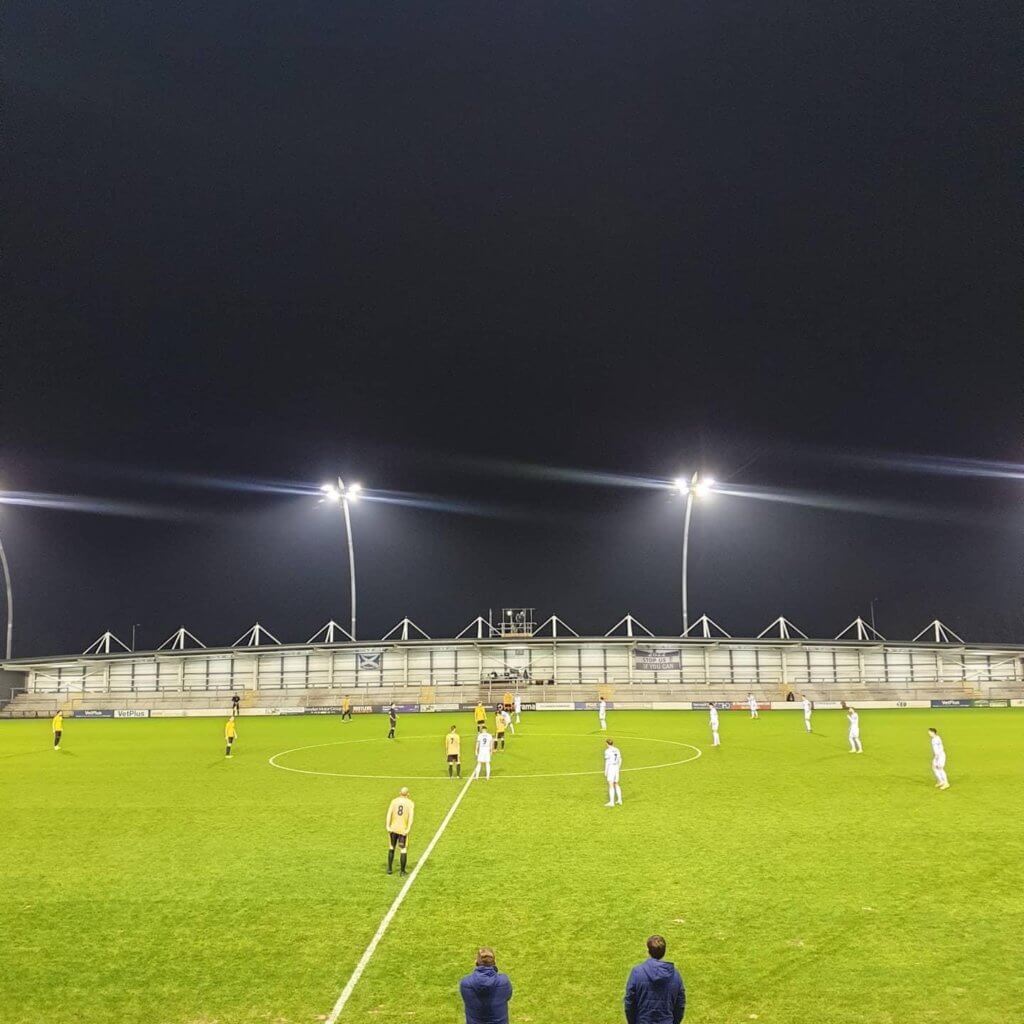 In a high-quality first-half, Bradford took an early lead thanks to Brad Dockerty. But the Coasters replied with two goals from Ben Tollitt and Kurt Willoughby. Against the run of play, the visitors equalised as Knight nodded home from close range. After the restart, the hosts took the lead for the second time as Luke Byrne’s cross was tapped home by Luke Conlan. But, into the second minute of additional time, Omar Sanyang picked out Jordan Windass and his cross was smashed into the far corner by Knight.

Despite an early surprise, as the sprinklers started spraying water in the middle of play, the visitors took an early lead. Dockerty cut inside onto his right foot and curled a lovely effort past Chris Neal from the edge of the box. The linesman raised his flag for offside but the referee gave the goal.

After the first goal, the Coasters dominated play with some excellent football and were rewarded with an equaliser.  Tollitt, who caused problems for his opponents all night, curled a right-footed effort past Atkinson from 20 yards.

Two minutes later, the hosts scored again. Striker Kurt Willoughby found space outside the box and fired a right-footed strike into the bottom corner past an outstretched Atkinson.

In the lead and extremely confident with the ball, Nick Chadwick’s side looked like a team who hadn’t lost at home this season. Working it from back to front, side to side, they oozed class. But Bradford stayed in the game, and against the run of play, levelled the score.

Harry Boyes, producing another mature display, received the ball on the left wing, and the left-back fizzed a cross into the box. Knight curved his run in front of defender Jack Sanders, and the striker glanced a header past Neal into the bottom corner.

The action didn’t stop there.

After a muscular injury to Isaac Marriott, the Avenue continued to attack as Dockerty, who was in fine form all evening, intercepted a loose pass and threaded a through-ball to Knight. The striker managed to get ahead of defender Alex Whitmore, but his shot was saved at the near post by Neal.

The Coasters went down the other end of the pitch to create an opportunity. Right-back Byrne picked out striker Jordan Hulme in the penalty area, but the former Altrincham man headed the ball straight at Atkinson from ten yards.

Just before the half-time whistle, them Bradford nearly took the lead again. A deep cross was flicked by captain Luca Havern into the path of Boyes, and the left-back tried his luck from distance, but his effort was saved by Neal.

After the break, the Avenue were hanging on as the Coasters pushed men forward to take the advantage.

A corner from Luke Brennan was met by Sanders, and with his header flying towards the top corner, Dockerty jumped to head the ball off the line.

Seconds later, the hosts created a three-on-two situation as Hulme pulled the ball back to Tollitt. The winger, rather than taking a touch, struck a first time effort over the bar from 20 yards.

Once more, Bradford were getting lucky to avoid conceding a fourth. Brennan’s corner picked out Whitmore and the captain’s header ricocheted off the post and a couple of bodies, somehow not finding the net.

Eventually, the pressure was too much for the Avenue as AFC Fylde regained the lead. Byrne and Brennan linked up well and the right-back got behind Dockerty to drill a low cross into the box. His teammate Conlan was there tap home from close range.

Just like Spennymoor, the away side nearly hit back with an instant reply. Dockerty showed character to bounce back from the goal and drove forward with the ball. As he got closer, the gap opened for the winger, but his shot didn’t have the accuracy to trouble Neal from 14 yards.

Following a number of substitutions, both teams still continued to search for a vital goal, for different reasons.

It didn’t appear Mark Bower’s side would get anything from the game, but the men from the Horsfall never gave up and snatched a dramatic equaliser.

Substitute Sanyang hit one of the best passes of the game, switching the play from left to right. Windass controlled the excellent pass and showed his quality by delivering a wonderful cross to the far post. Knight was lurking at the far post and smashed the ball past Neal from eight yards, to the delight of the Avenue dugout.