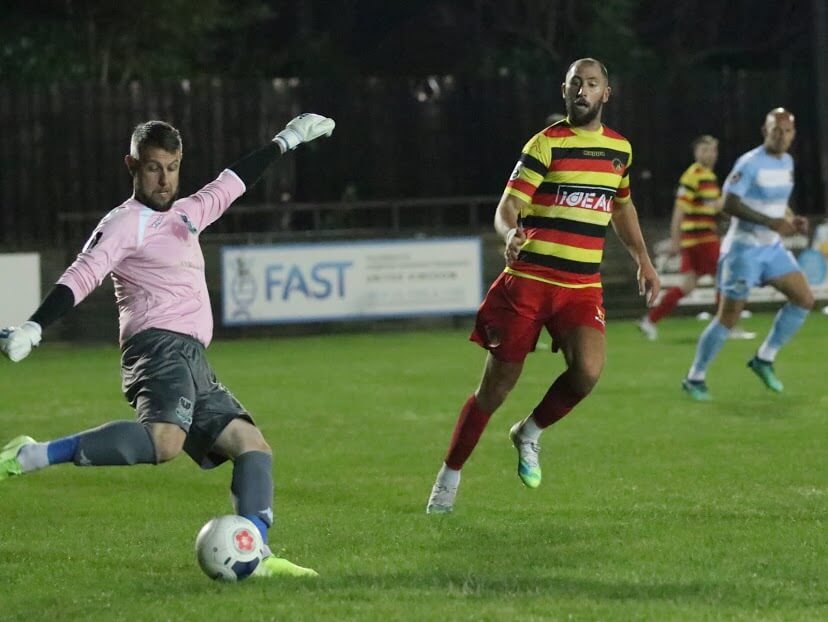 A late penalty denied Bradford (Park Avenue) a draw at The Citadel in a behind-closed-doors  pre-season friendly.

It was a familiar face who broke the deadlock as former Avenue favourite Adam Clayton rose above his marker and smartly nodded the ball past Dan Atkinson from close range.

In the second half, the Avenue looked dangerous on the break and Brad Dockerty made a huge difference after being introduced at half-time. The young winger drew his side level with a deflected effort before a late penalty from Luke Parkin gave the home side the victory.

There wasn’t much between both teams in the first 45 minutes. The home side enjoyed more of the possession, helped by the Avenue giving away cheap ball inside their own half on a few occasions.

But it was Mark Bower’s side who nearly took the lead as former Avenue goalkeeper Steven Drench was called into action to deny the Trialist from 14 yards.

Following a free-kick conceded by Jake Hibbs which was headed clear by the Bradford defence, the corner from Jake Charles was met by Clayton to give the Celts a narrow lead.

Before the half-time whistle, the hosts could’ve doubled their advantage but Atkinson produced a superb save, tipping over Jimmy Spencer’s curling effort from 20 yards.

Shortly after, Atkinson was beaten as Joe West lifted an effort over the goalkeeper from ten yards but the Avenue right-back Mark Ross covered well and cleared the ball off the line.

After the restart, the visitors caused plenty of problems, it was just the final ball that sometimes let the Avenue down. The introduction of Dockerty was a catalyst for the Avenue to catch the home side on the counter attack.

There were shouts of handball against Danny Ellis as substitute Tabish Hussain struck a powerful right-footed effort towards goal but it was blocked. The referee and linesman disagreed with the protests.

It was the Avenue who continued to push forward and deservedly drew level as Dockerty produced some excellent footwork and unleashed a low right-footed effort towards goal, and with the help of a deflection from Adam Nowakowski, it flew past Drench from 20 yards.

With the game heading for a draw, the home side snatched a dramatic winner. Tyler Walton broke through the middle of the park and evaded a few challenges, only for Ross to bring the midfielder down inside the box. From the penalty spot, Parkin sent Atkinson the wrong way to give Farsley Celtic a narrow victory.

Avenues next game was due to be away this Saturday at Spennymoor, but due to increased lock down measures in the North East and to protect staff and players it has been agreed to call the match off. We are presently trying to arrange an alternative last pre-season fixture before the FA Cup tie on the 3rd of October.