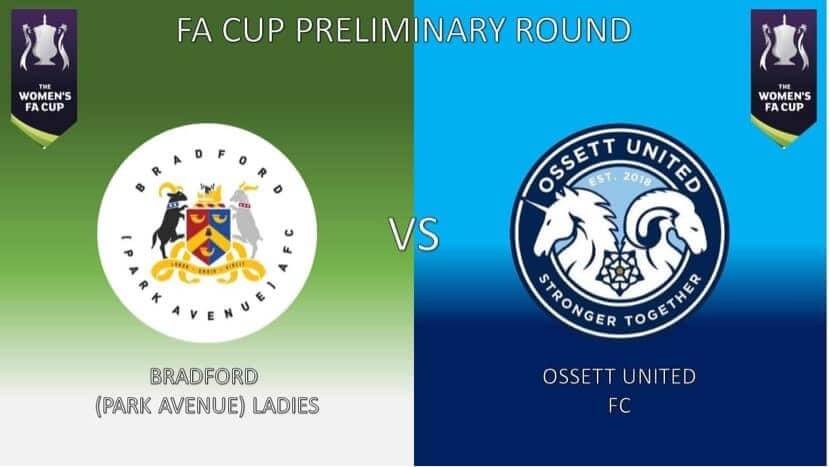 Bradford (Park Avenue) Ladies fall in FA Cup Preliminary Round against higher league opposition Ossett United, despite a strong showing.
It was the visitors who were quickest out of the blocks in the early stages, bringing out several great saves from Avenue goalkeeper Annie Roberts.

Ossett did break the deadlock after 10 minutes, when a probing pass broke through the Avenue back line, leaving Roberts 2 on 1 against the strikers, which Charlotte Adams was smart to convert.

A second was not long in coming, after another well worked move down the left opened up the Avenue defence and the Ossett striker slotted home from close range.

Avenue then had an excellent spell of dominance against the team from the higher division and could easily have been level, but spurned several chances from Kirsty Russell, bringing out saves from the Ossett keeper and Millie West rattling the woodwork.

Against the run of play, Ossett bagged a third when a cross looped over Annie Roberts in goal, before rebounding out off the post to a welcoming striker for a third to take Ossett in 3 goals up at half time.

The second half was much improved from Bradford (Park Avenue) and the visitors were finding less space in central areas.

Within minutes of the restart, Kirsty Russell had hit the post with two efforts, and Millie West forced the goalkeeper into a smart save.

Whilst Avenue had tightened up in central areas, Ossett were now finding space out wide and on the hour mark, two magnificent saves from eventual player of the match Annie Roberts kept the score down.

Avenue did register on the scoresheet when excellent play from Millie West set up Kirsty Russell who opened her account for the season from 12 yards out.

It could easily have been doubled minutes later when Russell broke the Ossett backline but fired just wide.

The game was effectively finished off after a counter attack as Avenue were pushing for a second. Great work up top from the Ossett midfield, followed by a great finish by Aleathia Smith.

Following the game, manager Neal Asquith had this to say, “Much improved second half from the girls against a very good opposition from the division above. Could have been a different story if we had converted our chances, but overall very happy with the performance and very much looking forward to taking this into our opening league game next week.”