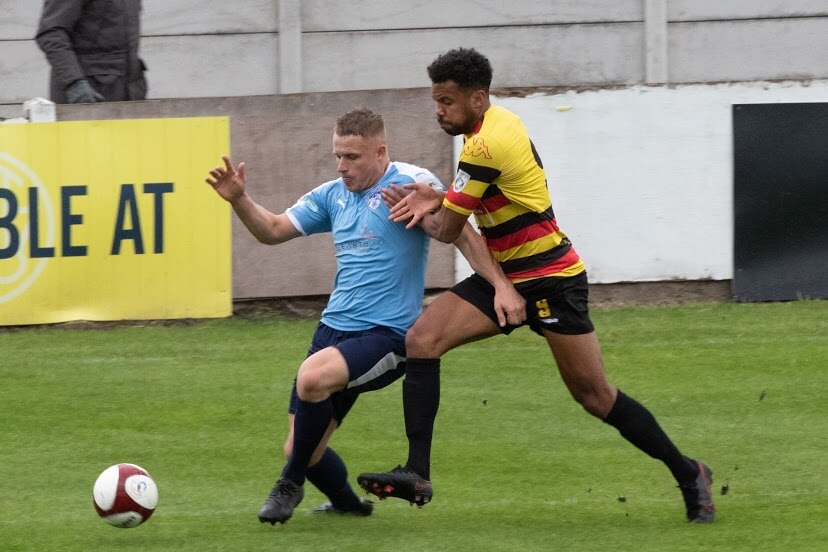 Bradford (Park Avenue) fell to their first pre-season friendly defeat when they conceded a late header from Jack Cowgill to give Ossett United a dramatic victory.

The visitors broke the deadlock with a magnificent effort from Trialist C before Elliott Harrison equalised on the stroke of half-time with a well-executed lob into the top corner from outside the box.

With time ticking away, it looked like the game would end as a draw, only for Cowgill to nod home from close range to the delight of the majority 200 spectators inside Ingfield.

The Avenue took a deserved lead after a bright opening. Despite watching a couple of headers from Adam Nowakowski failing to trouble goalkeeper Max Dearnley, Mark Bower’s men made their pressure count. A loose pass from Luke Blackburn was picked up Trialist C, and his impressive footwork allowed him to unleash a stunning right-footed strike into the top corner from 20 yards.

A few minutes later, the Avenue nearly doubled their advantage with another well-worked move. Nicky Clee, playing in an unfamiliar left-back role, spotted the run of Brad Dockerty at the back-post with a superb delivery, and the young winger timed his volley to perfection, but skimmed the top of the bar from 14 yards.

Just before the half-time whistle, an Ossett United corner caused problems amongst the Bradford defence. A solid header from Mark Ross was collected by the unmarked Harrison on the edge of the box, who controlled the ball and fired a right-footed looping effort past Dan Atkinson into the roof of the net.

The second half saw plenty of changes for both teams. The visitors had a new starting eleven apart from Trialist A who played the full 90 minutes.
With few notable goalscoring opportunities for the first 30 minutes, the game started to open up a bit more. Wayne Benn, a former Avenue favourite, watched on from the dugout as left-back Cameron Clark had a couple of chances on goal, one brushing the post from 25 yards and Cowgill poking an effort wide from a corner.

With five minutes remaining, it was Cowgill involved from a corner. The tall defender rose above his marker to nod the ball home past the Avenue’s substitute goalkeeper.

The away side tried to respond with a quick equaliser as young Academy product Jamie Lyons was set free, but with the goalkeeper off his line trying to narrow the angle, the striker looked to curl the ball around him only for his left-footed strike to be  easily saved from 20 yards.