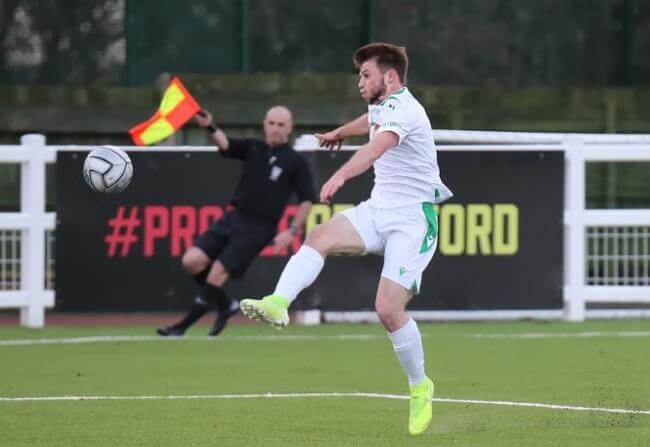 Lewis Knight broke the deadlock following good work from Adam Nowakowski. The home side doubled their advantage as Regan Booty weaved his way through the Minstermen midfield to slot home from inside the box.

After the break, Jack Redshaw halved the deficit with a well-taken goal. Straight from the restart, Bradford restored their two-goal lead with a rebound from Lewis Knight.

The visitors scored their second of the afternoon through substitute Rob Guilfoyle before Harry Boyes fired a stunning 30 yard strike to seal the win for the Green Army.

With only five minutes on the clock, Nowakowski battled well in the middle of the park and fed a through ball to Knight. The young striker continued his rich vein of goalscoring form by striking a right-footed effort past Pete Jameson from 16 yards.

Knight nearly scored his second of the afternoon. A superb tackle from Matty Downing, who was a late addition instead of Jordan Windass, allowed Nicky Clee to hit a wonderful first time pass to Knight. The Avenue’s number ten got the better of Sean Newton but his shot trickled agonisingly wide.

Despite Steve Watson’s men enjoying the better of possession, they found themselves two goals behind. Booty, with some excellent footwork and skill, escaped three challenges and curled a lovely right-footed effort past Jameson.

The rest of the half belonged to the visitors.

Robbie Tinkler, in the centre of midfield, had space outside the box and forced Dan Atkinson into his first save of the evening.

Michael Duckworth, returning to the Horsfall Stadium, was causing problems with his deliveries from the wing. The right-back crossed the ball into the area, and despite being unmarked, striker Redshaw failed to hit the target from 14 yards.

Again, the visitors looked dangerous from corners and free-kicks but Atkinson wasn’t needed to make a save. In fact, the Avenue could’ve added a crucial third before the break.

Knight, who led the line extremely well throughout the game, took the ball around Jameson, and following good pressure from the defence, Knight was unable to find the net from eight yards.

From the resulting corner, the ball was fizzed towards Mark Ross, but the defender’s header flew just wide of the post.

Both teams had a few half-chances that failed to trouble respective goalkeepers until the away side reduced Avenue’s lead.

Redshaw, who was arguably the Minstermen’s best player, looked sharp on the turn, and after driving towards goal, the striker struck a low effort, which appeared to take a deflection and went past Atkinson, via the post, from 20 yards.

Immediately from the restart, the Avenue dampened the celebrations from the away side  to score their third of the game. Brad Dockerty dribbled through a couple of challenges inside the area before curling a right-footed shot towards goal. The ball bounced off the far post straight to the feet of Knight, who was unmarked, and he tapped home from ten yards.

A few minutes later, Redshaw came close to doubling his tally. The striker ran across the edge of the box and his shot was expertly saved with a strong left hand from Atkinson.

With twenty minutes remaining, young substitute Guilfoyle got his side back in the game. The striker created enough space to try his luck from distance. His low shot saw Atkinson rooted to the spot as the ball found the bottom corner.

Despite conceding, the Avenue looked dangerous in attack, playing some excellent free-flowing football. Booty, who continues to impress since joining the Avenue, nearly scored a 25 yard free-kick.

Shortly after, Knight, on the left wing, delivered a teasing cross into the box to Dockerty, but his header went wide of the far post.

And then, the Avenue left-back Boyes scored a contender for goal of the season. Will Longbottom, who had a solid debut, spotted the loan signing from Sheffield United on the opposite side of the pitch. After taking a touch, Boyes drilled a spectacular left-footed shot from 30 yards into the top corner past Jameson.

In the final ten minutes, the Avenue produced a professional display to hold onto their lead and secure a much-needed and clinical victory in the rain at the Horsfall Stadium.