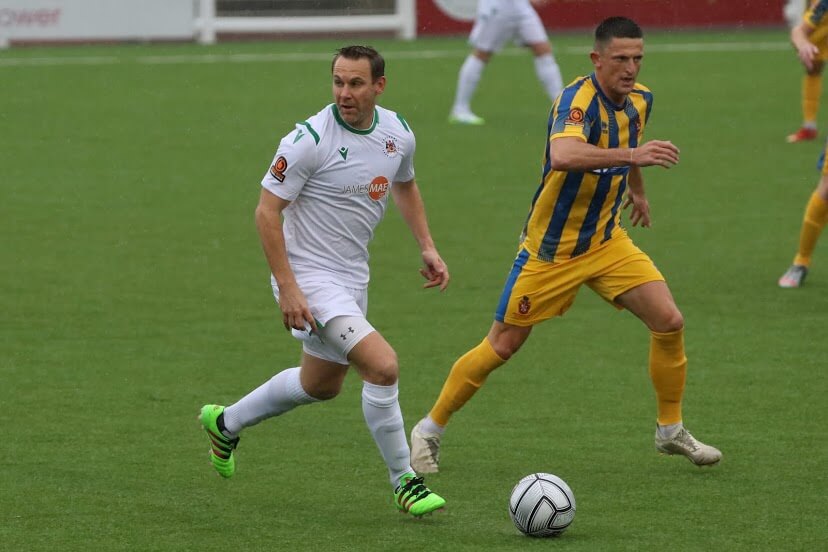 The hosts opened the scoring with a superb finish from Lewis Knight before the break. Despite hanging on for an extra 40 minutes, the Avenue conceded two goals in two minutes from Glen Taylor and Stephen Thompson. Into additional time, Taylor converted a penalty to give Jason Ainsley’s side the victory.

The Avenue, wearing their new white kit with green trim, familiar to the 3G surface, were playing some lovely one-touch stuff. Knight, leading the line, was causing plenty of problems for Nathan Buddle and Jordan Boon, playing off the shoulder but he was flagged offside a couple of times.

The first effort fell to Rob Ramshaw after receiving a pass from Taylor, but the number ten dragged his shot wide from 20 yards.

The home side had to thank Dan Atkinson with a superb save with his feet from Mark Anderson from outside the box, following a quick counter-attack.

Then, the Avenue broke the deadlock. Former Spennymoor Town midfielder Jake Hibbs threaded a lovely ball into the path of Knight, and after composing himself, the striker slotted home from 18 yards

Buoyed by taking the lead, Mark Bower’s side were showing some confidence, matching their opponents across the park, with Dockerty and Knight making the most of some excellent midfielder play from Nicky Clee and Isaac Marriott.

Just before the half-time whistle, Spennymoor Town were awarded a penalty as Adam Nowakowski brought down Kennedy inside the box. The striker stepped up and fired his effort over the bar from the spot.

Following the introduction of former Avenue man Jamie Spencer, the visitors dominated the second half from start to finish.

Yet again, Atkinson was called into action and produced a stunning save from close range as Jason Kennedy struck a powerful strike towards goal.

The Avenue, not helped by the withdrawal of Clee, struggled to get out of their own half as the men in yellow and blue pushed numbers forward. They were rewarded with their attacking threat when Spencer was fouled by Luca Havern in the area.

Taylor grabbed the ball and struck his shot low but Atkinson guessed the same way and held onto the ball.

Both Dockerty and Marriott left the pitch forcing the Avenue into using all of their substitutions.

Eventually, the pressure was too much for the hosts as Stephen Thompson’s corner was met by Taylor to nod the ball inside the near post.

From the restart, the Avenue lost possession and Ben McKenna sprinted 60 yards before finding Thompson, who slotted the ball past Atkinson from 12 yards.

With plenty to do and losing Luca Havern, the Avenue couldn’t trouble Dale Eve in the Spennymoor goal. Into added time, the away side were awarded a third penalty of the afternoon and this time, Taylor smashed the ball down the middle to give the side from Brewery Field the win.