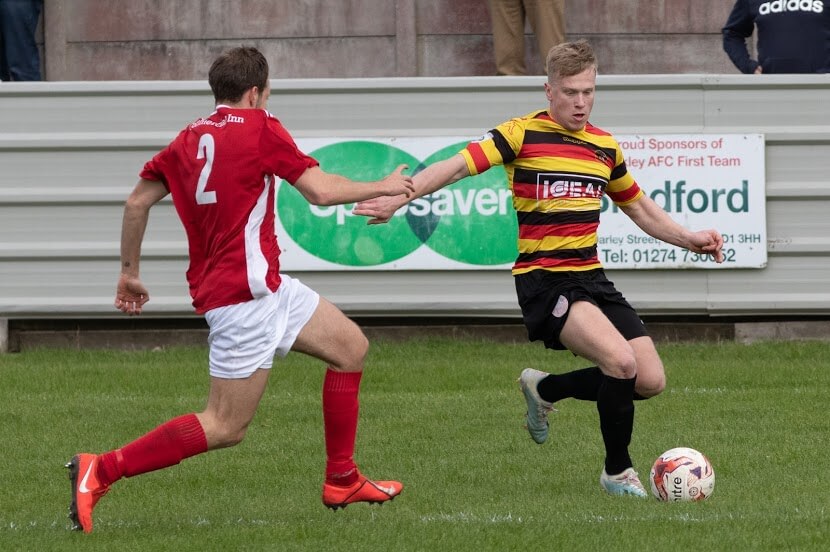 The winger opened his account tapping home a cross from Brad Dockerty before back-heeling the ball into the bottom corner following a one-two with Adam Nowakowski.

With only a minute on the clock, Dockerty used his pace down the right wing and pulled an excellent cross into the box which was converted by Johnson from close range.

Back at the beginning of the year, Nicky Clee nearly scored an extraordinary goal from 45 yards at Edgar Street and the midfielder tried his luck with a similar attempt, but goalkeeper Paul White was alert to make sure the Avenue didn’t extend their lead.

It was clear to see the team from West Yorkshire had spoken about the mistakes made at Kettering and were dealing with the direct approach from the Bulls, with long throws and deep crosses cleared away from danger. They restricted the hosts to long range efforts but they were nearly punished.

Luke Haines decided to unleash a stunning strike from 25 yards which smashed against the woodwork.

A minute later, the Avenue won a free-kick, 20 yards from goal. Dockerty stepped up and struck an effort underneath the wall which was saved by White who quickly got up and blocked Luca Havern’s rebound from close range.

After watching Dockerty leave the field with an injury, the Avenue nearly conceded an equaliser as Lennell John-Lewis got the better of Mitch Lund and got away a shot on target, which was cleared off the line by the excellent left-back Harry Boyes.

The pressure continued as a loose ball from Lund was collected by midfielder Tom Owen-Evans who hit a lovely right-footed effort towards goal forcing Dan Atkinson into a fine save.

With the Bulls looking dangerous, the Avenue were clinical and scored a wonderful goal. Johnson dribbled past a couple of defenders, and after a neat flick from Nowakowski, the number seven, with his back to goal, produced a cheeky back-heel to give his side a two-goal lead.

From the restart, captain Jared Hodgkiss delivered a teasing ball into the penalty area and Dan Jones managed to get a toe to the ball but, luckily for the Avenue, brushed the post and went wide.

The second half got underway with Josh Gowling making a double substitution to get back into the game.

But Mark Bower’s side remained organised and disciplined, restricting their opponents in the final third. It was the team in amber who could’ve added a third.

Nowakowski, leading the line well all evening, tapped the ball into the path of his supporting midfielder Isaac Marriott. The young number four tried to curl a strike from 20 yards on target, but with White at full-stretch, the ball flew inches wide.

Twenty minutes later, Johnson could and probably should’ve had a hat-trick. A corner from Clee was flicked at the near post by Nowakowski to the unmarked winger, but off-balance, Johnson nodded over from eight yards.

As the clock approached 90 minutes, Bradford were resilient across the park, with the Bulls struggling to trouble Atkinson in the away goal.

The full time whistle was blown to the delight of the visitors and three fully deserved points headed back to the Horsfall.