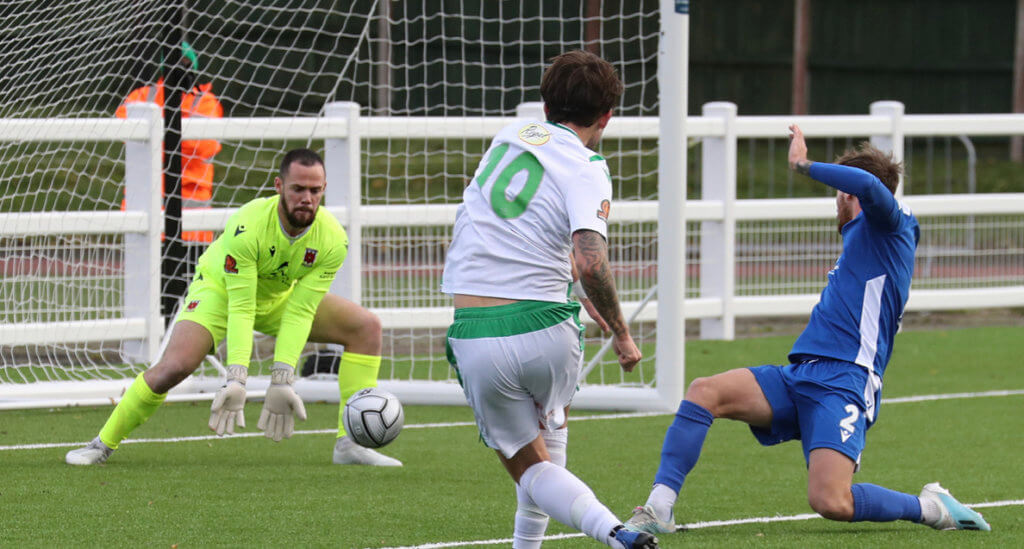 The Avenue made a superb start as Lewis Knight curled an exquisite right-footed effort past Rhys Lovett from 25 yards.

Just before the break, Jake Hibbs pulled a goal back finding the top corner. And after the restart, Harry Boyes fired an unstoppable shot from 25 yards past Lovell before Jordan Windass gave Bradford the lead.

The hosts equalised thanks to Bernard Mensah who nodded home a cross from Kevin Dawson.

After Liam Daly hitting the post in the opening minute, the Avenue broke the deadlock as Nicky Clee took a quick corner kick to Knight. The striker took a look at goal, and, with his right-foot, found the top corner from 25 yards.

Then, James Rowe’s side showed their attacking quality and, as proven this season, when they get some momentum, they’re a difficult team to stop.

A long throw caused problems amongst the Avenue defence and after a reactive save from Dan Atkinson from McClure, the rebound was smashed home by Asante from close range.

A couple of minutes later, the Tigers took the lead. A deep cross from Gavin Gunning caught out Atkinson and at the far post, McClure was alert to tap home.

Five minutes later, the hosts were awarded a penalty as Windass was adjudged to have handballed in the area. From the penalty spot, Asante gave Atkinson no chance.

Despite conceding three quick goals, the Avenue looked dangerous on the attack and reduced the deficit. After Knight forced Lovett into a save, the Avenue made the most of confusion amongst the defence. Omar Sanyang took the ball around the goalkeeper and set up Hibbs, who took a couple of touches before firing the ball into the top corner from 12 yards.

Just before the half time whistle, and to the relief of the visitors, the linesman raised his flag as Ben Morgan found the back of the net from close range.

With Mark Bower still in the changing room, Boyes sprinted forward and after finding space near the left wing, the left-back unleashed a spectacular left-footed strike from 25 yards which flew past Lovell into the top corner.

The goals continued as the Avenue regained the lead. Clee worked his magic in the centre of the park and threaded the ball into the path of Windass, who drove forward, and drilled a stunning shot into the bottom corner from 20 yards.

As the rain got heavier and the wind swirling around the ground, both teams were still proving a threat.

The home side equalised as Boyes’ pass was intercepted in the centre circle and Dawson delivered a cross into the area which saw Mensah jump the highest to nod the ball past Atkinson from six yards.

With eight goals on the scoreboard, Mark Bower’s side pushed forward and again, Knight used his pace to get behind the defence. He laid the ball into the feet of Boyes, and the left-back was close to finding the roof of the net, but it brushed the bar from 14 yards.

As full time was approaching, Gloucester City nearly snatched a dramatic win. Dawson’s long range effort went wide from 25 yards and somehow, from in front of goal, they were denied by the quick reactions of Atkinson.

The Avenue immediately went on the counter attack. Substitute Adam Nowakowski paused and played a perfect pass towards Isaac Marriott, but was denied a shot on goal as an outstretched Gloucester City boot directed the ball towards goal, only for Lovett to produce a fine save at his far post.