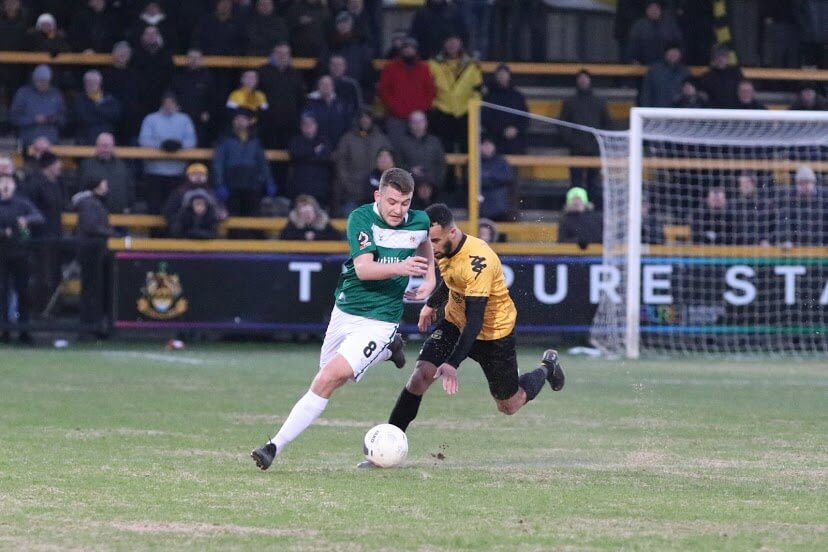 Bradford (Park Avenue) can confirm the signing of Jake Hibbs on a one year deal with the option for a second. After starting his career with Manchester City U18’s, Jake eventually found himself at Halifax Town, where he played 57 times for them in the National League. He capped his time there by helping them win the FA trophy at Wembley, with a dominating display in a 1-0 win over Grimsby Town.

Jake left Halifax for Spennymoor in 18/19 season, the move was unfortunately dogged by injury and playing in his less favoured role of Right Back. This led to him taking loan spells at Buxton and latterly with the Avenue last season where he started 9 times in his preferred role.

A dynamic box to box midfielder with strong technical skill, Jake is the perfect blend of talent, experience and potential. We look forward to Jake showing us exactly what made him hot property during his time at Halifax with an extended run in the Avenue engine room.

‘We are delighted to secure the signing of Jake Hibbs on a permanent basis following his loan spell with us. Jake put in some strong performances for us last season and we are looking forward to helping him push on and fulfil his undoubted potential.

Jake was a stand out player in The National League a few years ago whilst at Halifax, but has had a frustrating time more recently. We believe Jake has the potential to reach and surpass the standards he has set in the past and the key for him joining us was our determination to help him achieve this by playing him regularly in his strongest position in a style of play that suits his attributes.‘

‘When the opportunity came up to sign for BPA it was a no brainer for me really, having worked with Mark and Danny before. I’ve always enjoyed my time playing for them and feel that they can bring the best out of me by having a full season with them. Obviously last season was a bit of a strange one, both personally and for football in general, but the time I spent on loan at Bradford has made my decision really easy to join for the upcoming season. Looking at the players we have already signed it looks like its going to be an exciting season on the pitch, so I’m really looking forward to getting started and meeting the lads again.’