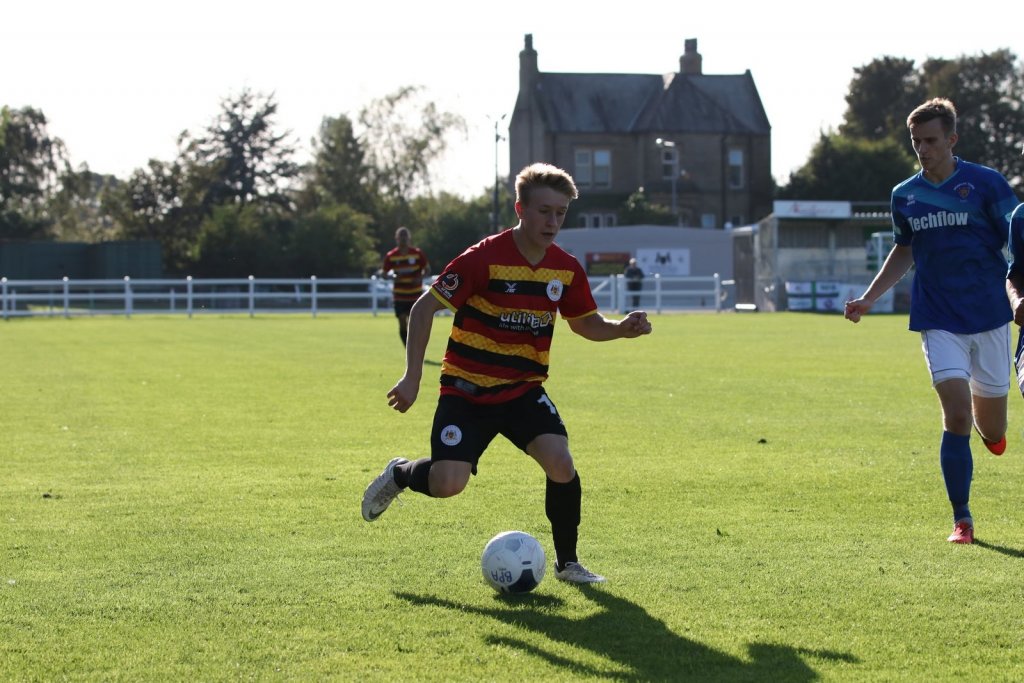 Marcus Wood was shown two yellow cards inside half an hour for Avenue, who could simply do nothing to stop a rampant home side.

Shane Byrne delivered a deep corner which beat Avenue goalkeeper Rhys Taylor but Armson could only volley wide of the post.

Pacey attacker Lee Ndlovu then got in behind on the right hand side and his low ball looked set to hit the back of the net, but Armson ended up on the ground and Avenue managed to scramble clear.

Brackley did manage to open the scoring on 19 minutes, as a result of Wood’s first booking.

The midfielder put in a poor challenge out wide and was duly cautioned, with Byrne delivering and the ball ending up in the back of the net following a flick from Glenn Walker – though the final touch may have come from an Avenue head.

Armson was almost gifted a goal as Taylor fumbled an innocuous low cross, but the number eight couldn’t quite squeeze the ball home.

Just before the half-hour though, Avenue went down to ten as Wood was sent off, shown an unquestionable second yellow card for a very poor challenge in the centre of the pitch.

It took the hosts just two minutes to make the extra man count, as Matt Lowe grabbed the second, Bradford failing to clear before the midfielder neatly finished from the edge of the box with Taylor scrambling for position.

The goals looked like they were going to come raining in as Ndlovu got in behind once more, but Taylor did excellently to keep his low effort out.

Brackley had the ball in the back of the net on 36 minutes as Lowe’s cross was touched in by Armson, but the flag was up on the far side.

However Armson only had to wait five more minutes to get in on the act, as he made the simplest of near post runs and nodded in Byrne’s corner for his side’s third.

And as Avenue were begging for the relief of the half-time whistle, Brackley struck a fourth, Ndlovu getting in behind before working some space and lashing home off the underside of the bar.

A double change couldn’t do anything to change Bradford’s fortunes, as the impressive Byrne netted a fifth on 54 minutes, latching onto Ellis Myles’ through ball before rounding a helpless Taylor and slotting home.

Carl Baker struck the woodwork with a header before forcing Taylor into a save, parrying out a long-range strike before the goalkeeper did brilliantly to keep out Dan Holman’s follow-up.

The substitute looked desperate to get on the scoresheet, and he came close again as he ran 60 yards with the ball before lashing just over the bar.

Baker then hit the woodwork himself, following up on an excellent save from Taylor, keeping out a long-range Lowe strike.

The seventh finally came with 10 minutes to play, Ndlovu getting a deserved second as he touched home an excellent Luke Fairlamb cross.

Substitute Holman rounded off the scoring with just over five minutes on the clock, Ndlovu beating Taylor to a long ball over the top before squaring to his strike partner to add his name to the extended list of scorers on a sorrowful afternoon for Bradford.